An Adulterated Education, Part 1: Kurt Vonnegut, Jr.: “No kid ever learned anything from Sesame Street.” 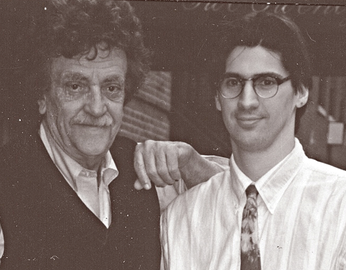 A bit back in my personal timeline, I had an opportunity to spend the better part of an afternoon with one of my favorite writers/human beings, Kurt Vonnegut, Jr. When I was in college, having read Slaughterhouse Five, Cat’s Cradle, Breakfast of Champions, Hocus Pocus, God Bless You, Mr. Rosewater, et. al, I considered him a prophet, if not a deity. Still do. We ate orange slices that he peeled as we sat in the expansive kitchen of his Manhattan townhouse watching the sun dapple through the leaves of his backyard and cast prismatic rainbows onto the wooden table through the stained glass ornaments in the windows. From time to time, I’ll mine the many interviews I’ve done with accomplished people to bring you their views on education, reading, and writing.

“Since I could put letters together into words I’ve been cow-blasted by the written word and the power it has to tell the truth. Images are easily manipulated because they don’t require the filter of a common culture. Images go right for the jugular. Pure propaganda. Today, people are swamped with images rather than words on a page. When I was still going to them, movies had scripts with pacing based on literary conventions. Reading was so much more a part of our lives. Before TV, everybody knew Moby-Dick. We even knew the Bible, for Christ’s sake. Now, we know The Simpsons. I’m sure it’s a fine show. I’ve never watched it, but I’ve seen the t-shirts, and they look funny. And yet I can’t talk about it, and that’s the thing. We don’t have a common culture anymore, but it doesn’t matter that much since most people lead lives hardly worth living. Okay. The truth is I’m sorry television exists, but it does. It’s like a rotten teacher in high school, except it’s everybody’s teacher. It’s a teacher that teaches nothing. No kid ever learned anything from Sesame Street. The news presents history without consequences. Good shows are good to see like gymnastics is good to see. What good does a somersault do anybody? Not much, but it’s fun to watch. It might even be good for our souls. Television just might be one of those things that make life worth living, along with organized religion and cigarettes. And yet you have to be careful. Those things, like the thalidomide that made all those poor babies deformed in the 1950s, or the lead the Romans cleverly put in their pipes, have side effects. I bet the Romans didn’t think they could be any stupider or lazier. Neither do we. And yet, there you have it.”