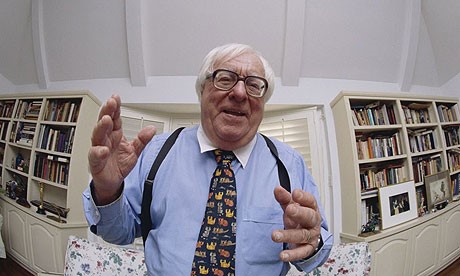 A hero of mine, as well as a favorite writer, Ray Bradbury wrote some of the greatest, most imaginative works in our culture, including, “The Sound of Thunder,” “I Sing the Body Electric,” The Illustrated Man, Fahrenheit 451, The Martian Chronicles, Something Wicked This Way Comes, and the screenplay for John Houston’s version of Moby-Dick, a classic in its own right. It was my good fortune to spend a lively morning with him in his Pasadena office, so chock full of science fiction chachkas it was like attending a ComicCon convention for two, me and Ray. From time to time, I’ll mine the many interviews I’ve done with accomplished people to bring you their views on education, reading, and writing.

“Anyone with any IQ will open a book because that’s usually what great brains crave. When people say well, kids aren’t reading as much as they used to, I say the schools have to teach students how to read. There’s as much as an art to reading as there is to writing. Give someone a good story and they’ll want to read it. You can’t keep people away from a good story. Bad books will turn your brains to mush just as quickly as bad anything else. The ideas are in the stories, the stories are in the written word, then there’s everything else. It’s the idea that counts. We need stories for our existence. The history of mankind is all about blueprinting ideas, often through stories, and midwifing those ideas to birth.  Science Fiction writers predicted a lot of the ideas in our current age of electronics and computers. That’s why a lot of our books get burned—temporarily. My Fahrenheit 451 has been burned, ironically for those who know that that book is about burning books. Kurt Vonnegut’s Slaughterhouse Five has been burned. They’ve even burned Huckleberry Finn. All these books come back. We’ll be reading Huckleberry Finn on Mars.”